Assembling an Item From Lifetime Products

Some customers, among others, have reported back on their Lifetime Products item they purchased. They frequently advise us on the difficulty they experience when assembling their items. To be clear, most customers do not have any troubles with their items - a small minority do. Of that minority, the majority of those take issue with the assembly. We recently had one of our employees purchase one of the 22127 Lifetime round picnic tables and wanted to report back on the assembly experience. Please note that while you may not be purchasing a Lifetime picnic table, the point of this is instructive and should be applicable to any of Lifetime Products models.

"I must say, to start out, that not any one step of the assembly was difficult or hard to understand. However, it did take my wife and me 3 hours to put the table together. Hopefully, our experience will help you slash your assembly time in half, or better. One thing that you should be aware of to start your assembly is that Lifetime frequently groups hardware parts (screws, nuts, bolts, etc.) by section of the assembly. This is to help you keep track of what you are doing and what you need next. So, on our 22127, for instance, the hardware was grouped by table frame assembly and bench assembly. Figuring this out before you start making the product should help cut time off your assembly. From there, like I mentioned previously, no one step was difficult to understand. However, when reading the instructions, you really need to do just that - READ THEM! As soon as you start assuming, based on the picture or parts needed for that step - what you need to do for that step, you are going to run into trouble. For instance, at the end of several steps in the 22127 assembly, Lifetime will have little boxes that say stuff like, 'Warning: Do not do such-and-such thing until such-and-such step' or 'Important: Do such-and-such thing before proceeding with such-and-such thing'. In particular, one part of the table frame assembly had us attach a horizontal bar to the main framework of the table using a couple of screws. Sounds easy enough, right? So, I started attaching the bars like a I would anything with multiple screws, screw in each screw part way at a time until they are snug. However, as I approached it this way I found that one could start just fine, but the other was impossible to move to the point the other one had done. After nearly stripping the second screw to a point it could not be used, I noticed one of those little boxes on the instructions that said that I needed to put in one screw at a time. Upon completing the first screw, I was to unscrew it one full rotation and then put in the other screw. So, I did just that and almost like magic, the other screw went right in. Reading the entire step on the instructions before proceeding with assembly will save you tons of time. The instructions are parts are just fine, in my opinion. The only thing the person assembling the product needs to do is read them."
Previous Post
Next Post 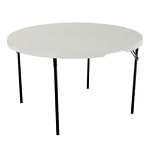 I truly agree with this article. When I have put together Lifetime products, it has been simple, except when we start thinking we know what to do and stop reading the instructions. Then, we get lost, and it takes us forever to put together our product. We have to read through the instructions thoroughly! There will not be problems with putting our product together if we do. Sometimes, putting a product together, is or seems very difficult, especially for me, because I am not much of a builder. But if I REALLY read the instructions thoroughly, putting together a Lifetime product is simple.