Posted by Administrator on 5/20/2014 to Competitive Edge Product Reviews
Lifetime has emerged as one of the fastest-growing manufacturers of backyard playground equipment. For the last 10 years they have had much success in producing backyard equipment including storage sheds, picnic tables, storage deck boxes, and more. It was a bold step to enter an arena that seemed somewhat saturated. There are several manufacturers producing backyard playground equipment, but nobody producing equipment consisting of commercial grade quality with a residential price tag. Wooden playgrounds can be a lot of fun. They do involve maintenance such as painting, staining, crack and chip repair, and are prone to insect infestations including wasps and termites. Many of these issues are solved by using Lifetime Playground Equipment. Lifetime began producing commercial grade playground equipment under the subsidiary name Big Stuff. Big Stuff slowly began changing back to the brand name of Lifetime. The big stuff brand included some models that are now discontinued such as 435001 and 438001. These models were a great introduction to lifetime's playground category.

Today Lifetime manufactures a lot of playground equipment. There are deluxe play sets that have monkey bars, two sets of slights, a climbing rope wall, and a clubhouse such as model 90440 and 90274 (the difference being primary colors versus earth tone colors). These are very popular models and the highest end that lifetime manufactures. The newest Lifetime Playground Equipment deluxe play set does not feature a clubhouse, that has a tower. Recent popular box office hits have made this one of the top sellers when you consider the tower. This would be model90440 and90042 and it has a very contemporary and unique design. The tower has a platform or deck area where children can play. There is a safety bar that goes all the way around. The bottom part of the tower is enclosed and feels like somewhat of a fort. It includes the rock wall, two swings, a trapeze bar, and the next for large slide. There are several A-frame play sets (not just a-frame swing sets - we'll get to those in a minute) currently being manufactured. These are model numbers 90042 (same as 90188) and90137 again with the difference being earthtones versus primary colors. These are a step down from the deluxe playsets in size, but there is no compromise in quality and functionality. These playgrounds have the same size of extra-large slide, clubhouses, climbing walls, swings, and trapeze bars. The design is somewhat different as illustrated in the picture below. 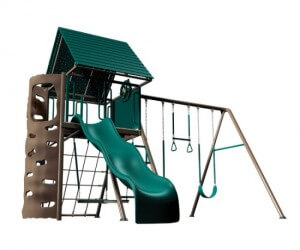 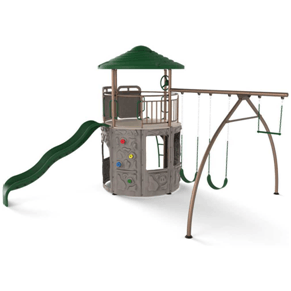 When considering what type of swing to put in your backyard it's important to recognize whether or not cement is required. The good news about all of these models is that there is no cement required. Should you choose to put these in a more common or public area there may be local county regulations that require you cement them into the ground anyway. The footprint is so large that it is impossible to tip from swinging. Smaller A-frame swing sets can commonly run into this problem.

As time went on Lifetime realized that many customers want a commercial grade playground, but may not want something quite so beefy and distracting. Enter the monkey bar adventure playground sets. The Lifetime Playground Equipment monkey bar sets have the same basic functionality. They include, as mentioned in the title, monkey bars. They do not have a clubhouse, but they still have a slide. There is nothing on the structure that could catch enough wind to threaten the integrity of the structure. It includes three swings as opposed to two and also has a trapeze bar. It's difficult to see in the picture, but there is a fire men's pole in the back. These have become very popular as the pricing point allows one to own a commercial quality structure without breaking the bank. These also come in earth tones and primary colors under the models 90143 and 90177. 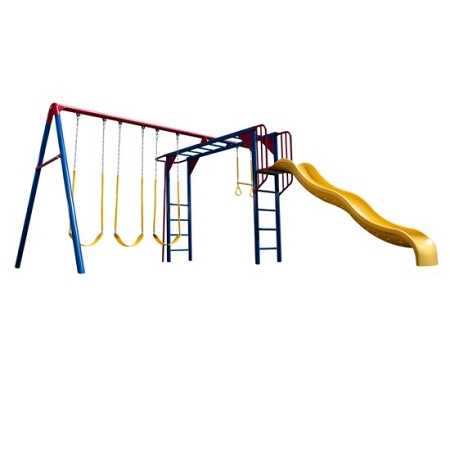 Some people prefer to have the simple good old A-frame standalone swing sets. These are models 290038 and 90200. Even these do not need to be anchored down. Heavy 3 inch diameter steel tubing keeps the structure solid and in place. It includes two swings and trapeze bar. Many people like to swap out the trapeze bar for a toddler bucket seat to accommodate infants and small children. One nice thing about all of these models is the quick clip Carabiner products that attach these to the mainframe. In other words, you can quickly change out a trapeze bar for swing or vice versa. There are no special tools required. This comes in handy if you have a toddler bucket that you use when children or grandchildren come over. Having assembled one of these myself I was surprised that it only took us about 20 minutes. It is definitely a simple process that does not need to be hired out. 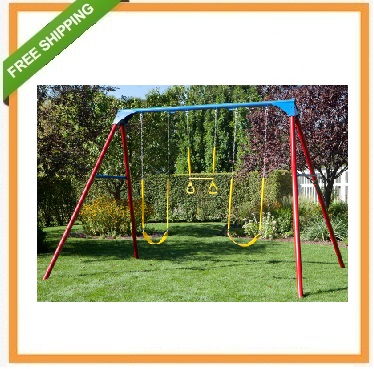 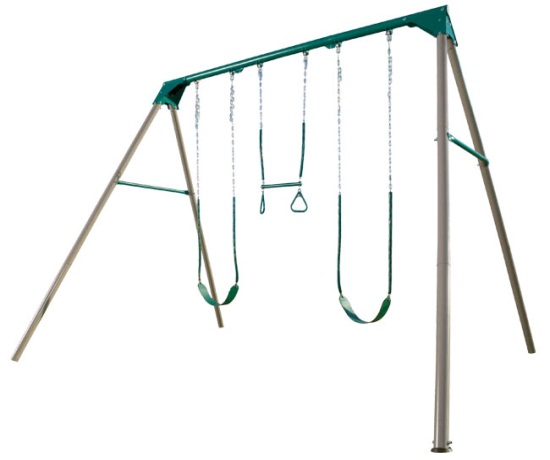 Many of us have fond memories of playing on Teeter totters. You don't see those very much anymore it parks. There's probably a reason for that. It probably has something to do with safety. This Teeter totter passes all safety standards. Any hard edges have been rounded or covered to eliminate scratching. Unlike wooden Teeter totters children will not get splinters or scrapes. It has a weight capacity of 600 pounds. Lifetime manufactures a Teeter totter that is a perfect addition to any playground system. The can seat 1-7 children at one time. As the Teeter totter rocks back and forth the driver of the plane fills the plane turn and tilt. The propeller even spins as the child turns the wheel. Many people don't realize that it has an adjustable height setting to accommodate older and smaller children. These also come in primary and earth tone colors. A word on primary versus earth tone covers. Many people prefer earth tone over primary colors. In fact, the majority of Lifetime playsets are earth tone. There are, however, many people who like the loud McDonalds like colors in your backyard. The bright yellow, red, and blue signal playtime in shout fun. Often times, people will purchase the earth tones only because it's required in the neighborhood covenants. Whichever model you prefer - rest assured they are identical in every way besides color. 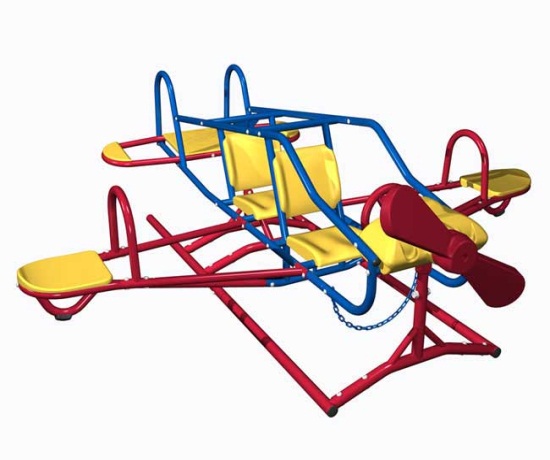 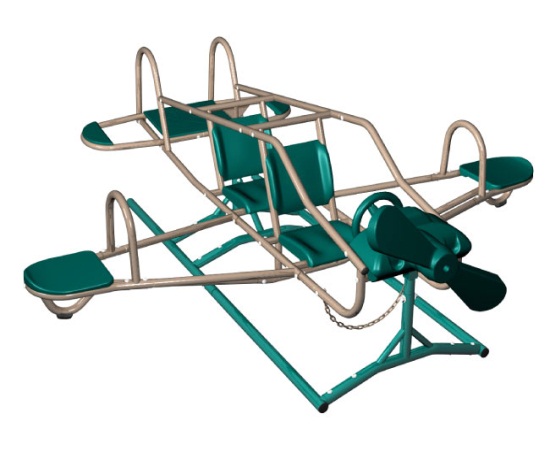 Lifetime used to manufacture a Teeter totter that was a helicopter and not any supplier. The helicopter was not nearly as popular and is currently not being manufactured. However, Lifetime is notorious at bringing back models due to popular demand. Stay tuned if you are waiting for a helicopter Teeter totter. The swivel Teeter totters the newest Teeter totter on the Lifetime market. The neat thing about this Teeter totter is that you can seat for children. Everybody faces each other and it isn't long before there is a lot of laughing and giggling going on. Not only does it go up and down, but it swivels from side to side. It is a completely different experience from the ace flyer and has a lower price tag. It is also quicker to assemble. Although most people still prefer the ace flyer, many do not know of this new model and it is gaining momentum. This would be model 90511. The last of Lifetime's playground equipment includes home climbers. People often referred to these as monkey bars depending on where you live in the United States. The dome climber is a dome shaped structure that children can climb on. Many families get creative and will throw tarps over the top to create a fort. Worried about the grass? Two adults can easily move this to minimize traffic on the grass and to accommodate the good trusty lawnmower. These are 5 feet high and 10 feet wide. They don't stand out like a sore thumb and can be moved with some help from the grown-ups. Children love to climb on these and begin to resemble monkeys and now sloth animals. 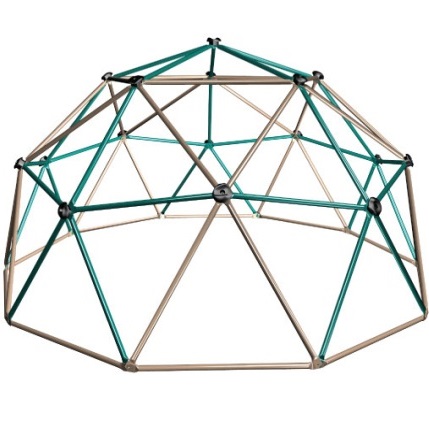 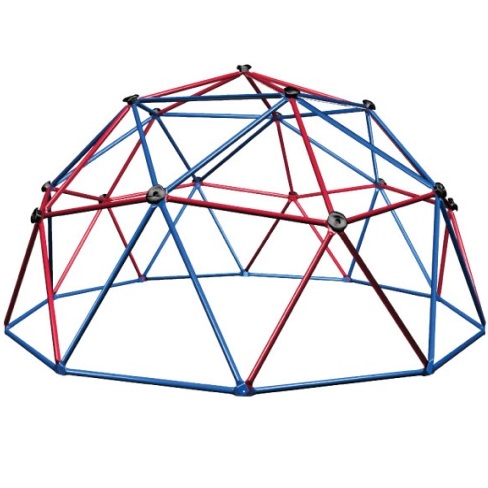 Fire up the barbecue grill and invite family and friends over for a nice summer dinner and games in the comfort and safety of your own backyard. The Lifetime playground equipment will entertain your kids while you enjoy time relaxing with friends and family. 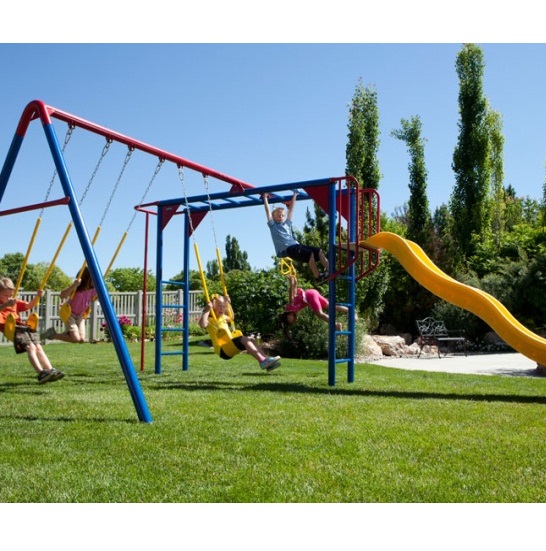 Hello, Neat post. There's a problem with your site in internet explorer, would check this? IE nonetheless is the marketplace leader and a huge component of folks will omit your wonderful writing due to this problem.

IE displays fine when I checked it. What problem are you seeing?

I ordered the biggest swing playground they make. The only thing I have received so far is PISS POOR CUSTOMER SERVICE THAT NEVER GETS BACK TO YOU WITH THE MISSING PARTS OR EVEN ANSWER YOUR EMAILS. AFTER 6 PHONE CALLS 4 OF THEM I GOT HUNG UP ON I AM ABOUT TO HIRE A LAWYER TO GET ANY SATISFACTION WHATSO EVER

Bruce, are you sure you’ve got the right company? I don’t see any order under your name or email address. Sounds like you may have ordered from a company other than Competitive Edge Products, Inc? We are regularly staffed and available by phone M-F 7-5pm at 866-308-5484