Posted by Administrator on 11/29/2013 to Competitive Edge Product Reviews
My 2014 Review of Ice Super Chexx Bubble Hockey Arcade Game Machine The Super Chexx Ice Hockey Arcade Game Machine is AMAZING! Our family got the Ice Super Chexx Bubble Hockey game about 3 or 4 years ago, and it still looks and is as good as new. The Ice Hockey game lasts a long time without wearing out, and breaking. It has powerful speakers, great music and a great announcer voice.
The Super Chexx Ice Hockey Arcade Game Machine is a dome-shaped machine with rods on each end where you control the hockey players. There are 5 rods and a goalie on each side. To hit the puck, you twist your rods around so that your players hockey stick hits the puck. When you score a goal, the machine will automatically pop the puck back into play. To eject the puck quicker, you can hit the red button on the right side of your sticks, which is the eject button, as well as the Boo (where you can hear fans booing) button. I love playing this game against another person as we aggressively battle to be victor. When nobody will play with me (because I always beat them, ha, just kidding) then I play by myself. I go back and forth from end to end hitting the puck into the goal.
I try to see how many goals I can score. In the past I've scored over 100 goals in one game playing by myself. 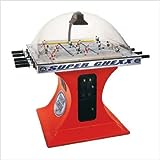 The Ice Super Chexx Bubble Hockey game is precise and accurate. It rarely makes mistakes like giving random goals, and it almost always picks up the shots you've made. The puck hardly ever gets stuck, because there is scarcely any positions on the whole table where the puck could get stuck. I think it is sweet that the game keeps track of the shots you've made (points), and the shots you've attempted. This is a cool feature because you can see how many shots on goal you have taken. Along with the score it keeps track of time in a convenient way so that you can know about how much time you have left to win the game. One of the coolest features though, for the Ice Hockey Chexx game, is that it can go into overtime. If you are down 3 to 4 and you score a goal at the last second, so it is now 4 to 4, and the game is over. The machine will say something like at the end of regulation, overtime! And here we go, OVERTIME! Then you start playing again, and the first one to score wins! The only thing they could've done to improve this ice Super Chexx Bubble hockey game in my opinion is to make the 4th quarter an actual quarter, instead of first one to score ends the game. But, otherwise I love this product. Super Chexx Ice Hockey is AWESOME!

Product Description: The ICE Super Chexx Bubble Hockey Table is the original and still the best dome hockey game around. In this classic arcade game, two players control five hockey players each by sliding and spinning the rods, trying to knock the black puck into each others goals. The automatic puck return system serves the hockey puck by popping it up from the middle of the playing field after every goal. For a truly exceptional bubble hockey experience, the overhead scoring mechanism records goals, shots on goal, period, and running time. The player to score the most goals before the time runs out wins. If a game is tied after the normal game play it will automatically go into sudden death overtime - so there is always a winner on the ICE Super Chexx Bubble Hockey Table! 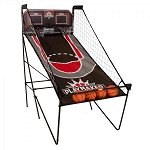 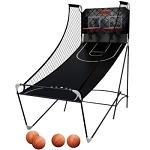 I love this game. We used to play it as kids at Chuck E Cheese Pizza. It was quite a rush to play and see all the lights, scores and sound effects in action. The accuracy of the controls is great as well. It is quite fun to score on the other team and to push the "boo" button on the other team when they are going slow. The timer which ticks down adds to the excitement and gives opportunities for exciting buzzer beaters.

There is an ending. Just remember that I meant for this to be an art game. I do feel like I spent an inordinate amount of time on the much more traditional gameplay elements, which might make the meaning of the game a bit unclear. In the event you mess around with it though, you...

Not a bad product, similar to Sheelti Bubble Hockey Tables. Similar ones I saw at Game Room Guys. Best shop to get bubble hockey tables at reasonable price as well! http://www.gameroomguys.com/Games/Bubble-Hockey/

Great games, but extremely difficult when reaching later levels. You should get these games if you want a challenge and like to punch everything ;) Visit GameroomGuys.com for a great gaming experience.